I am so excited to share this recipe with you! It is one of those recipes that looks so impressive everyone will love it. Time to create a new family tradition this year! Kick start your day with a piece of this sweet and delicious Cinnamon Apple Pull – Apart Bread recipe. When you pull it apart, you will see the little pockets of apple, cinnamon, and that gooey drizzle that compliments it so well it will be irresistible. It’s full of fall flavors and a perfect bread to wake up to in the morning. When you make this Cinnamon Apple Pull apart bread, it’ll be a complete showstopper! So I dear you to purchase some apples and make this bread! You won’t regret it. I promise you that.

What is the Cinnamon Apple Pull-A- Apart Bread?

Cinnamon Apple pull-apart bread is a homemade bread that contains spiced apples and a sweet glaze. It consists of a soft-baked dough sprinkled with cinnamon arranged in a baking pan, baked until set.

The first pull-apart bread originated in Hungary. It serves as a Hungarian dessert known as Arany Galuska or golden dumpling. The Hungarian immigrants brought this dish with them when they immigrated to the United States. It now serves in the United States of America as a breakfast pastry and as a sweet treat. The bread in earlier times was known as monkey bread. It contained a piece of yeast dough dipped in butter and served with jam or preserves, requiring no knives for cutting. The bread became popular in Southern California in the 1940s. By the 1070s, loaves of dough pieces enveloped in either brown sugar or cinnamon sugar were created and known as golden dumpling coffee cakes and Hungarian coffee. 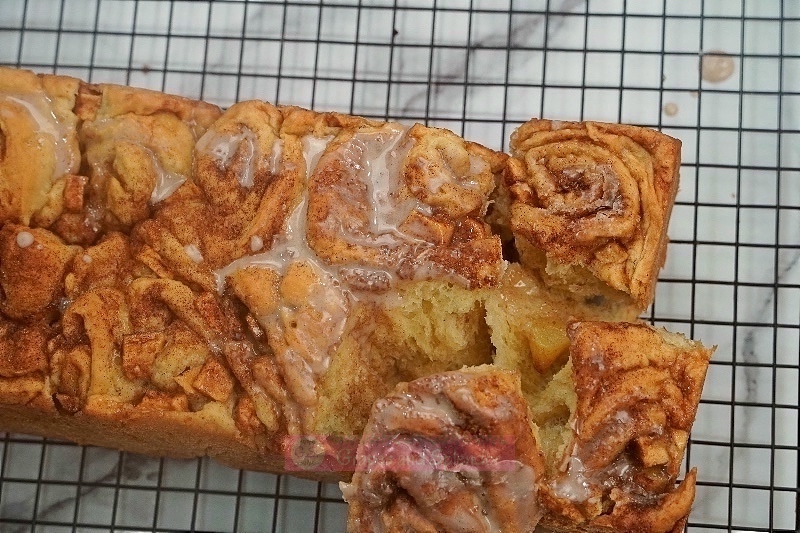 When should you eat this cinnamon bread?

Cinnamon apple pull-apart bread is perfect for a special breakfast. You can replace your sweet desserts with this sweet ooey-gooey Pull-Apart bread. It is also a good choice for festivals, fairs, potluck, office parties, and holiday baking. 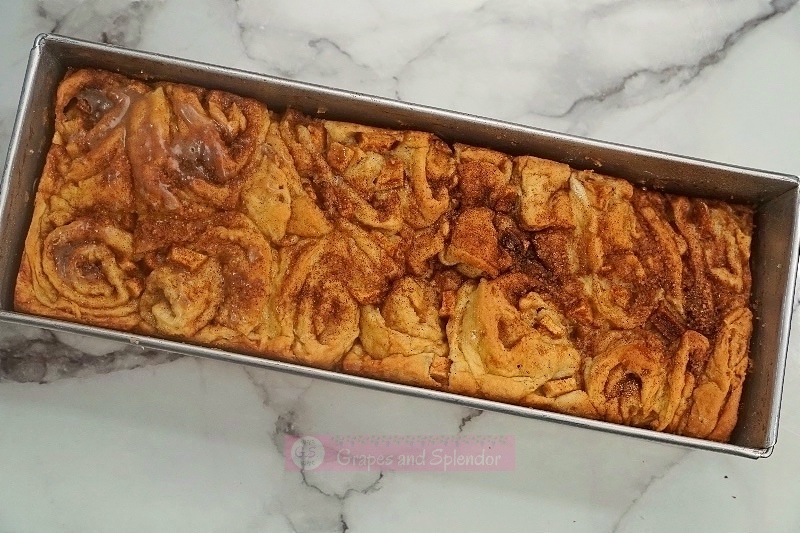 This soft pull-apart bread serves best with any glaze of your choice. I love mine with cinnamon glaze and honey glaze. This bread would also be great with some pecan or some walnut sprinkled in it to give it a nutty flavor. Make this recipe an even more special treat by serving with a scoop of your favorite whipped cream or ice cream.

How the ingredients work

Yeast: The rising agent of the bread.

Warm milk: Yeast grows best at a warm temperature. Therefore, the tepid milk allows the yeast to ferment the dough quickly and readily.

All-purpose flour: Flour provides structure to the bread. It is high in gluten, which helps the dough to expand during baking.

Butter: Helps to shorten the gluten strands in the flour resulting in a soft dough.

Eggs: This binds the ingredients together.

How is it done?

There are three vital elements to the recipe, the bread dough, the apple filling, and the glaze.

In a bowl, combine the yeast and milk, let it stand at room temperature for 10 minutes until it looks foamy.

In the bowl of the stand mixer, combine eggs and sugar using a dough hook attachment. With the mixer at low speed, gradually add melted butter and yeast mixture. Adjust mixer to medium-low speed, add flour and knead the dough until it’s soft and smooth. Constantly scrape down the sides and bottom of the bowl for even mixing. Transfer the dough to a greased bowl, cover with plastic wrap and let it rise on the counter for an hour or until it doubles in size. In the meantime, grease a 9×5 inch bread pan. 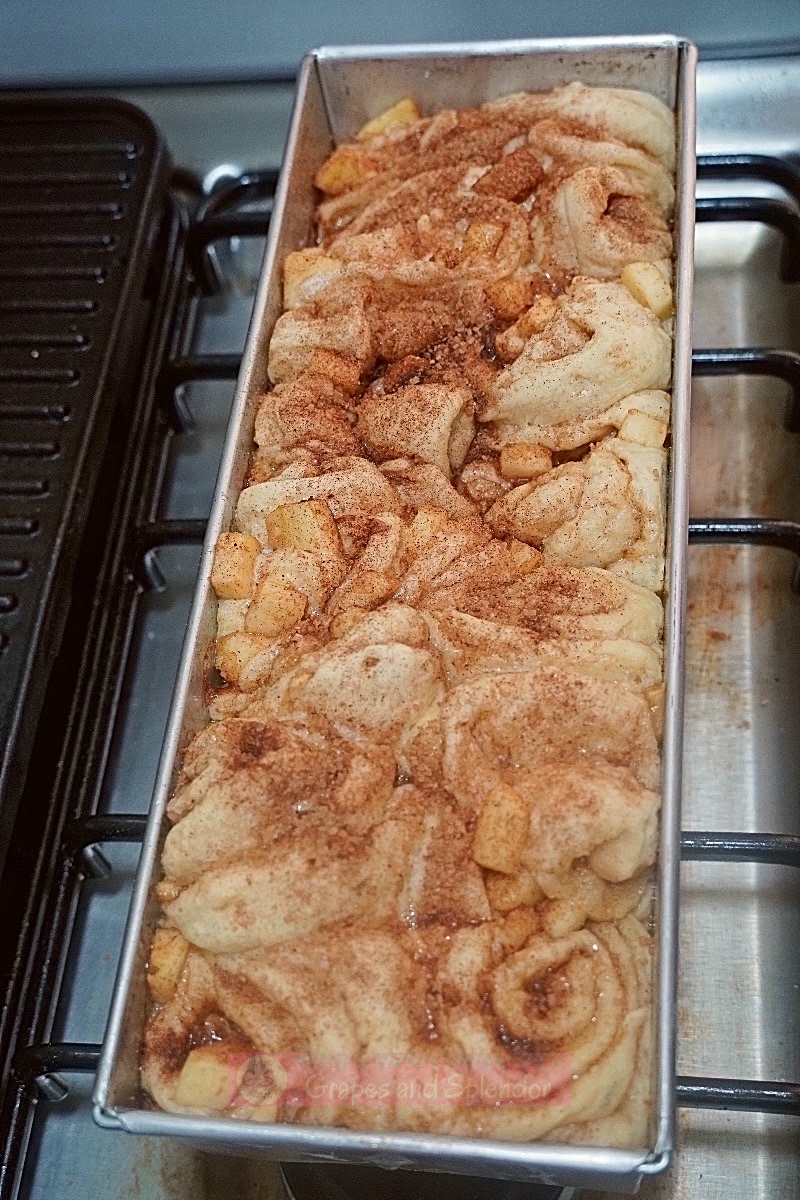 First, prepare the apples by peeling, coring, and dicing your apples. In a bowl, combine brown sugar and cinnamon. Have your diced apples ready!

Roll out and Filling the dough

After the dough has had time to double in size, it’s time to roll it out. Sprinkle flour on the work surface and roll out the dough into a 20 x12 inch rectangle. Brush the dough with melted butter, then sprinkle on sugar mixture, top with diced apple.

To create the layers, cut dough into six 20×2 inch pieces, stack pieces vertically on each other, alternative with the brown sugar and apple into the pan. Cover with plastic and let it rise (proof) at room temperature for 30 minutes.

In the meantime, preheat the oven to 350 degrees F. After 30 minutes, bake bread for an additional 30 minutes uncovered, then covered with aluminum foil for the last 10 minutes. A toothpick inserted in the center that comes out clean proves that the bread is ready.

I know that you will be excited now. However, let the bread cool in the pan for 15 minutes, then transfer to a cooling rack to cool completely.

To make the glaze

Combine all the ingredients in a bowl. You can add more milk to adjust the consistency of the glaze. Drizzle the cinnamon glaze over the bread and serve! 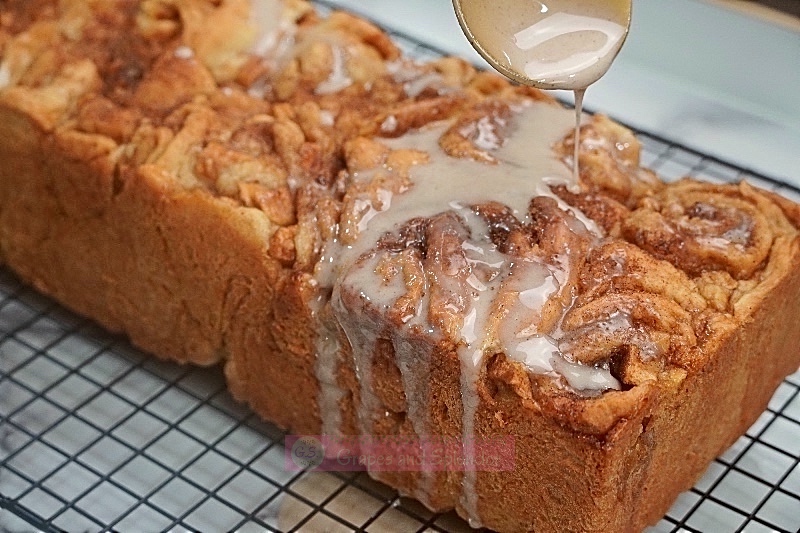 Why should you make this pull-apart bread?

You can add variety to your morning breakfast presentation. You can start the process from the night before to save time in the morning. This method is easy to follow and requires little experience. The ingredients used are healthy for the whole family. This recipe can be a fun project for kids, too.

Can I make the dough overnight?

Yes! You can make this the night before. After making the dough, let it rest in the refrigerator. Allow it to reach room temperature before using it. 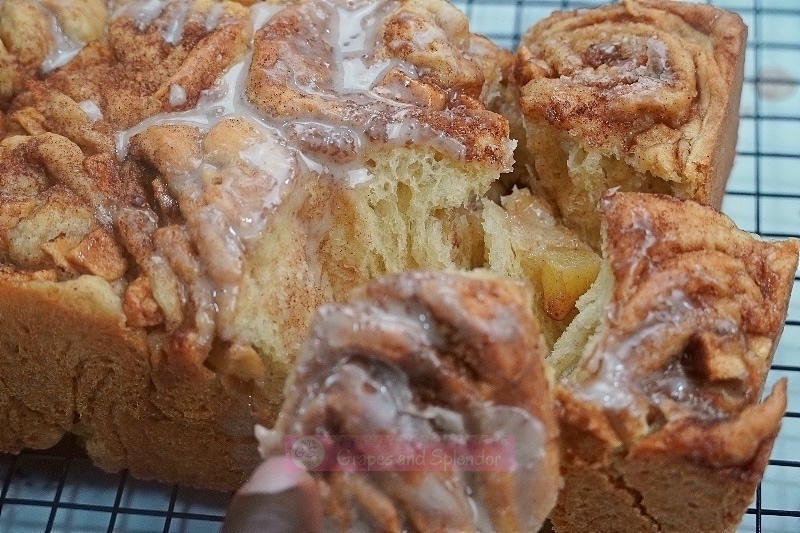 It’s always time to start something new. Add this recipe to your list of things to do. This recipe has so much interest to add to your next festival or family buffet line. The dough aspect of this recipe is super straightforward and easy. You can use active dry yeast if you don’t have instant yeast. Ferment it in warm milk and water for 5 minutes before adding it to the dry ingredients. You can also knead it by hand if you don’t have a stand mixer. Bread the sweet and delicious way!

To prepare the filling:

To make the glaze 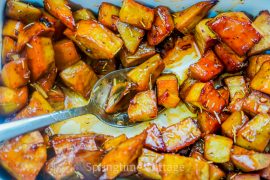