Share on Facebook Share on Twitter Pinterest Email
Is there anything better than a recipe that is just so delicious, it’s been passed down from generation to generation? There’s something about the moment that you’re blessed with a recipe that you’ve been eating for years and always wondered, “How does grandma make this so GOOD?” She’ll probably tell you that it’s made with love, and that’s what makes it so delicious. But finally, when that day comes, and you’re old enough to concoct that recipe for a family (or friends!) of your own, it truly feels as though you’ve been let in on a secret that’s been well-kept for years. 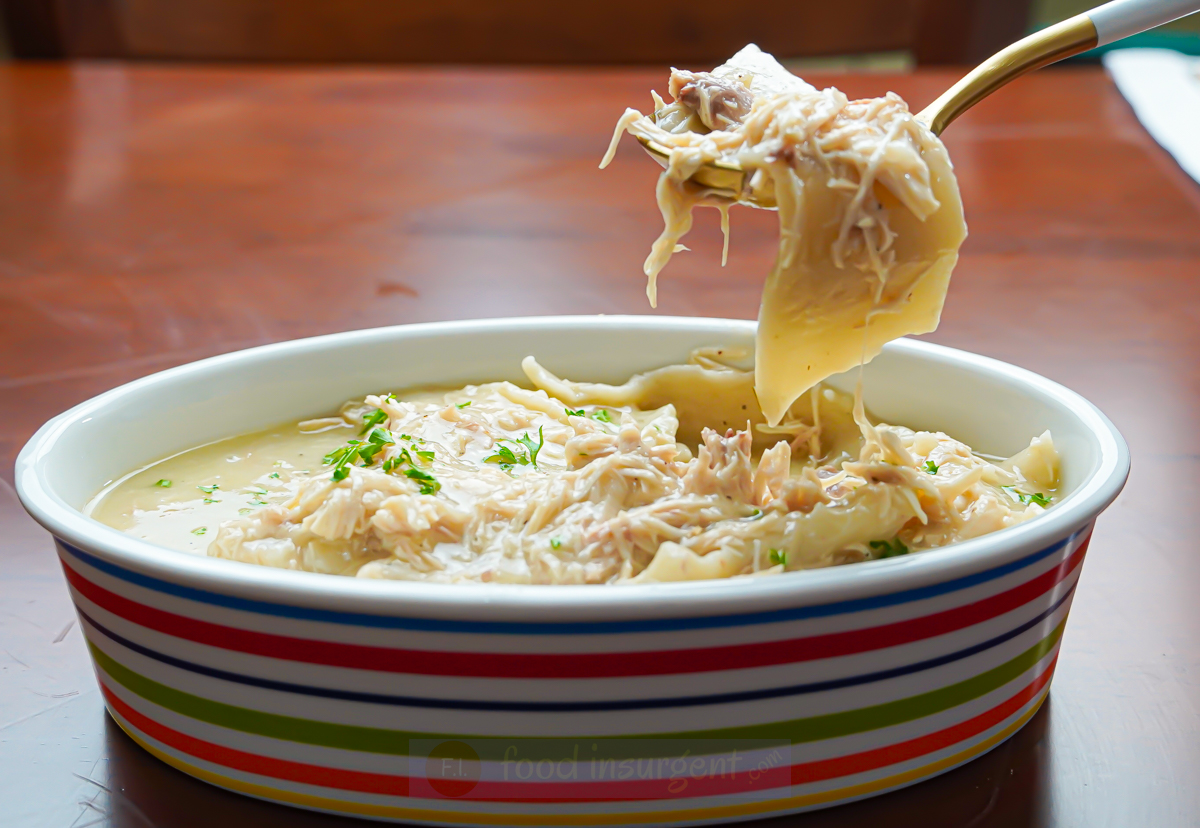 That’s exactly what this Southern-Style Chicken n’ Dumplings recipe is. A little secret that we’re going to share with everyone. It’s just so good that we feel it should be enjoyed by everyone who wants to taste it! There are so many ways to make this dish, but this really is the best chicken n’ dumplings recipe that you’ll find. It’s a “southern-style” dish because it was adopted in Virginia from European recipes that were brought over to America when it was colonized – as far as we know so far, at least.

History of Chicken n’ Dumplings in the Southern United States

A traditional chicken n’ dumplings recipe can be found in Mary Randolf’s cookbook, “The Virginia Housewife,” which was published in 1836. Adaptations of the recipe can be found in many other southern cookbooks throughout the 19th century, like “The Kentucky Housewife” by Lettice Bryan. Although these cookbooks have “Housewife” in the title, they weren’t typically prepared by housewives, especially in the southern states during this time – they were typically prepared and perfected by enslaved Black people. Chicken n’ dumplings is a relatively cheap and easy dish to make, which popularized it during the Civil War and later on, the Great Depression. It helped families put flour, leftover chicken, and vegetables to good use. Food wasn’t something that could exactly be wasted in times of strife. In many old recipes, however, the meal wasn’t actually made with chicken, rather just broth, vegetables, and dumplings. Back then, Chicken wasn’t as cheap or available as it is today, so they had to make do with what they had! 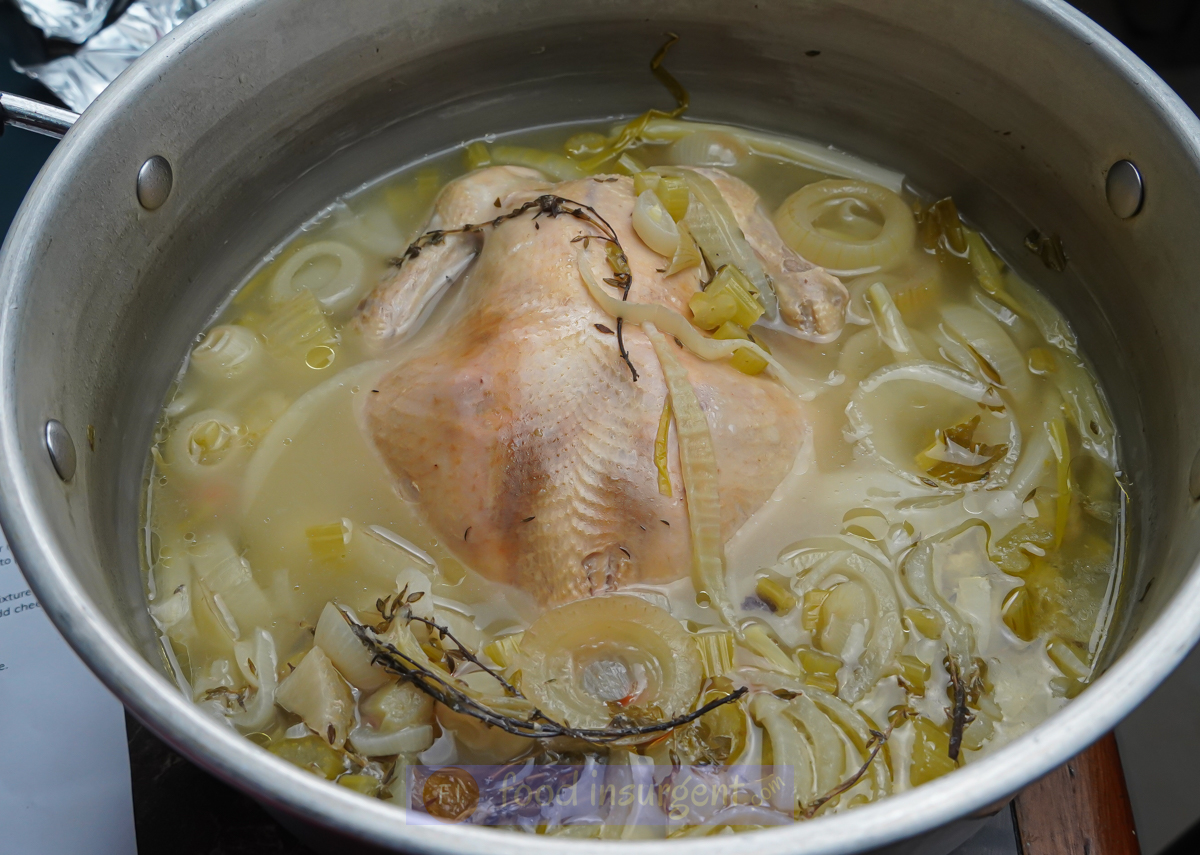 This here is the absolute best recipe for chicken and dumplings. The dumplings are nice and small, so you can get a few in with every bite. It creates a nice, big pot of goodness. You will have enough to feed the whole family or save some for the rest of the week! Chicken n’ dumpling is the perfect dish to enjoy on a chilly winter’s day or when you’re just in the mood for a little bit of traditional comfort food. This recipe for the best chicken n’ dumplings, calls for a whole chicken that has been thawed and cleaned. The whole chicken is placed into a large pot and covered with water and a few veggies to really flavor the broth. You can use carrots, celery, and onion. This process creates a delicious broth that is full of fat and flavor, which will be used later on to bring this entire dish together. 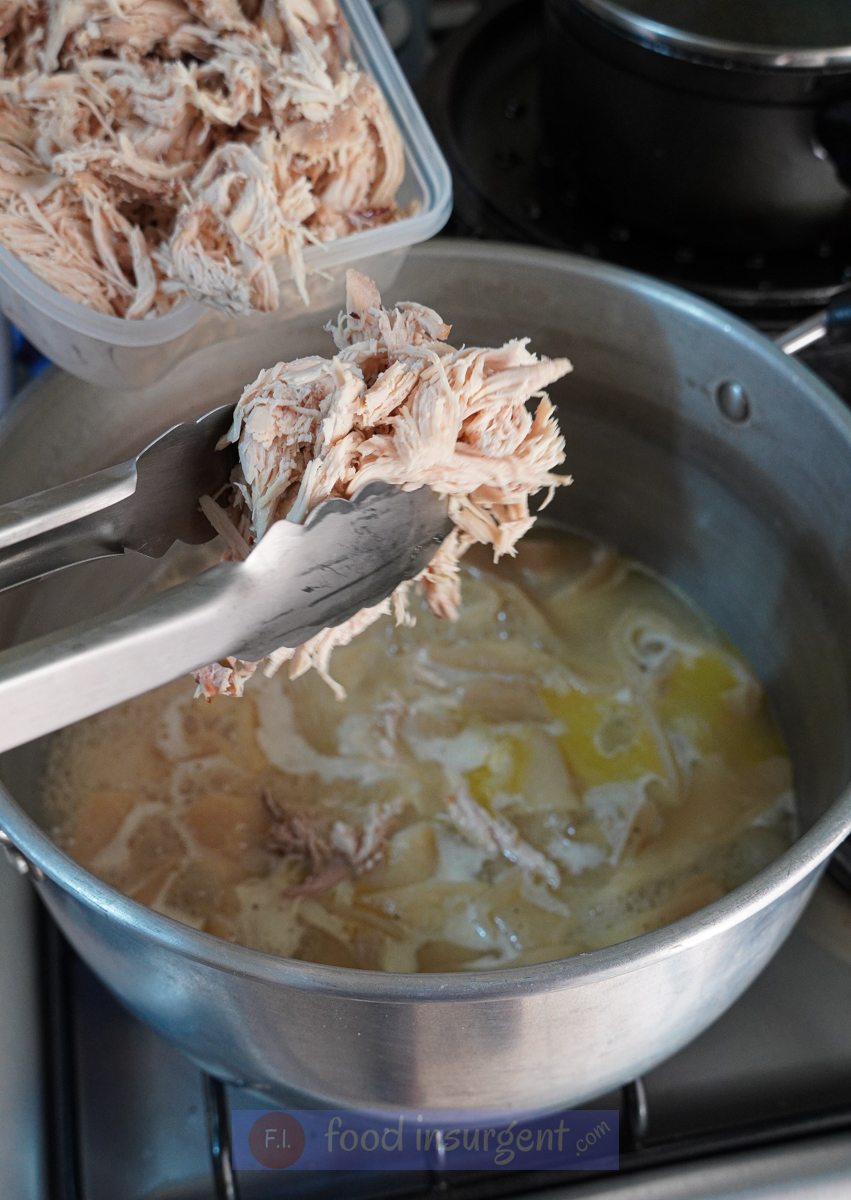 How to handle the whole chicken

Once the chicken has cooked for an hour, remove it and let cool. Start to peel the skin away and chop off the meat. Cut the meat into bite-sized pieces before adding them back to the broth and turning up the heat. If you added vegetables to the mix, make sure you strain them out of the broth. While the chicken is boiling, it’s time to make the dumplings! You’ll want to use either a pastry mixer or two knives to mix the shortening, salt, and flour until the mixture looks like a bunch of peas. Add HOT water and flour to the bowl and mix until you have a soft dough ball. Divide the ball into three equal-sized balls, and let it rest for 10-minutes. Create your work surface by sprinkling a generous amount of flour onto a countertop. Roll each ball out until they resemble a large pie crust and then slice them into inch-wide squares. Add flour to the top of the dough or rolling pin if you find that they’re sticky. 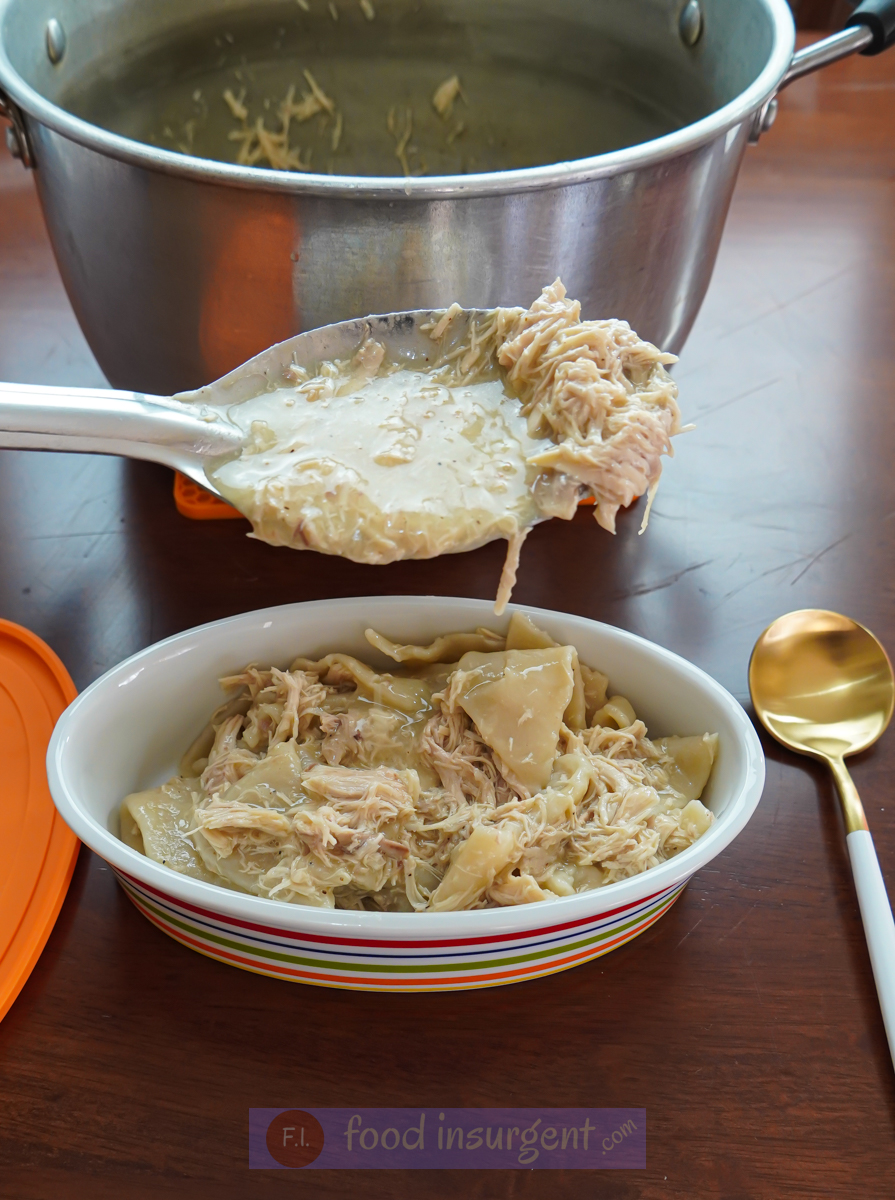 Then, you’re going to make a slurry. The slurry is a concentrated starchy liquid that is sometimes made with cornstarch and water, but this recipe calls for flour and water. It’s a quick and easy way to thicken up sauces and gravy – or in this case, chicken n’ dumpling broth! It’s very similar to a roux, but it doesn’t have any fat added to it. There’s already enough of that in the broth, so there’s no reason to add any more. Once you pour your slurry in, you just have to let it all work together for a few more minutes, and you’re ready to serve! 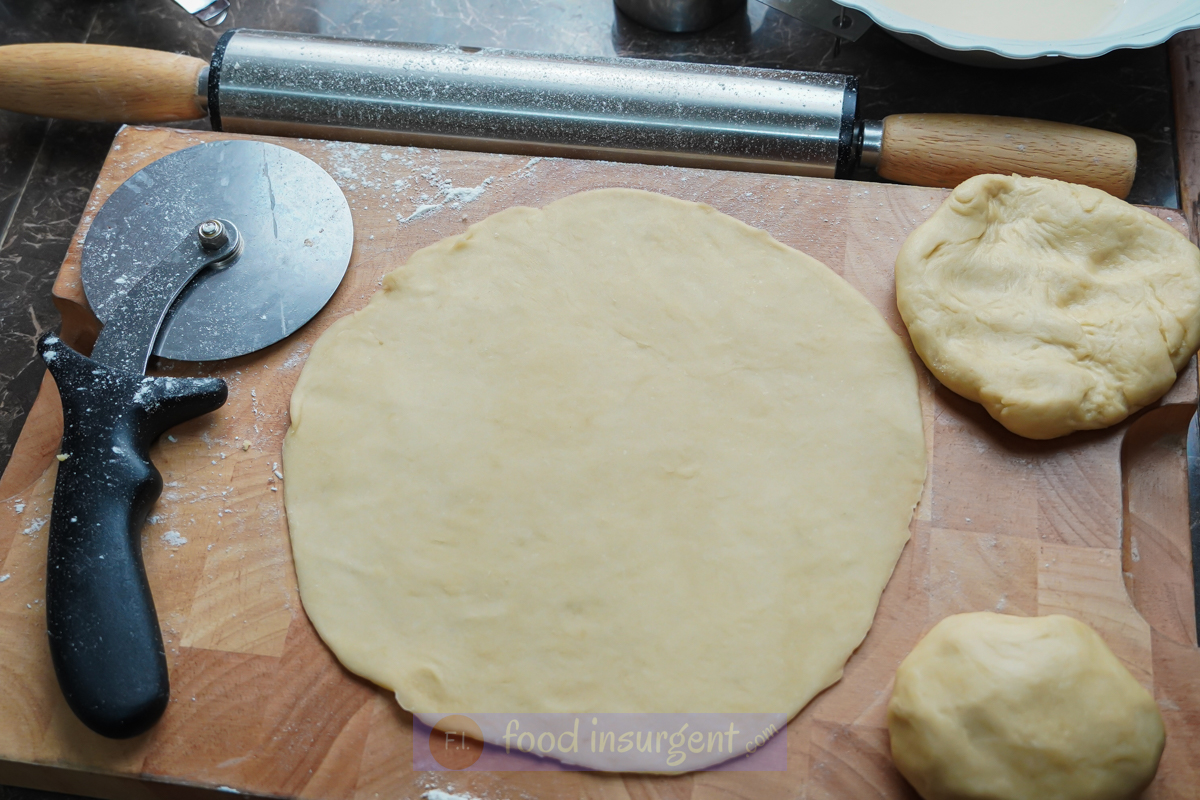 Tips from The Chef

You may have seen other chicken n’ dumplings recipes floating around on the internet that has peas and carrots in them. If you want to customize this recipe by adding veggies, you absolutely can do that by skipping the step in which you strain the broth and adding frozen or canned peas during the second boiling process. After you drop the raw dumplings into the water, cover the pot with a lid, and DON’T PEEK for a few minutes. This will trap the steam inside the pot and make sure you get nice and fluffy dumplings. If you want to cut down the cooking time, you can use a pre-cooked rotisserie chicken and store-bought chicken broth. 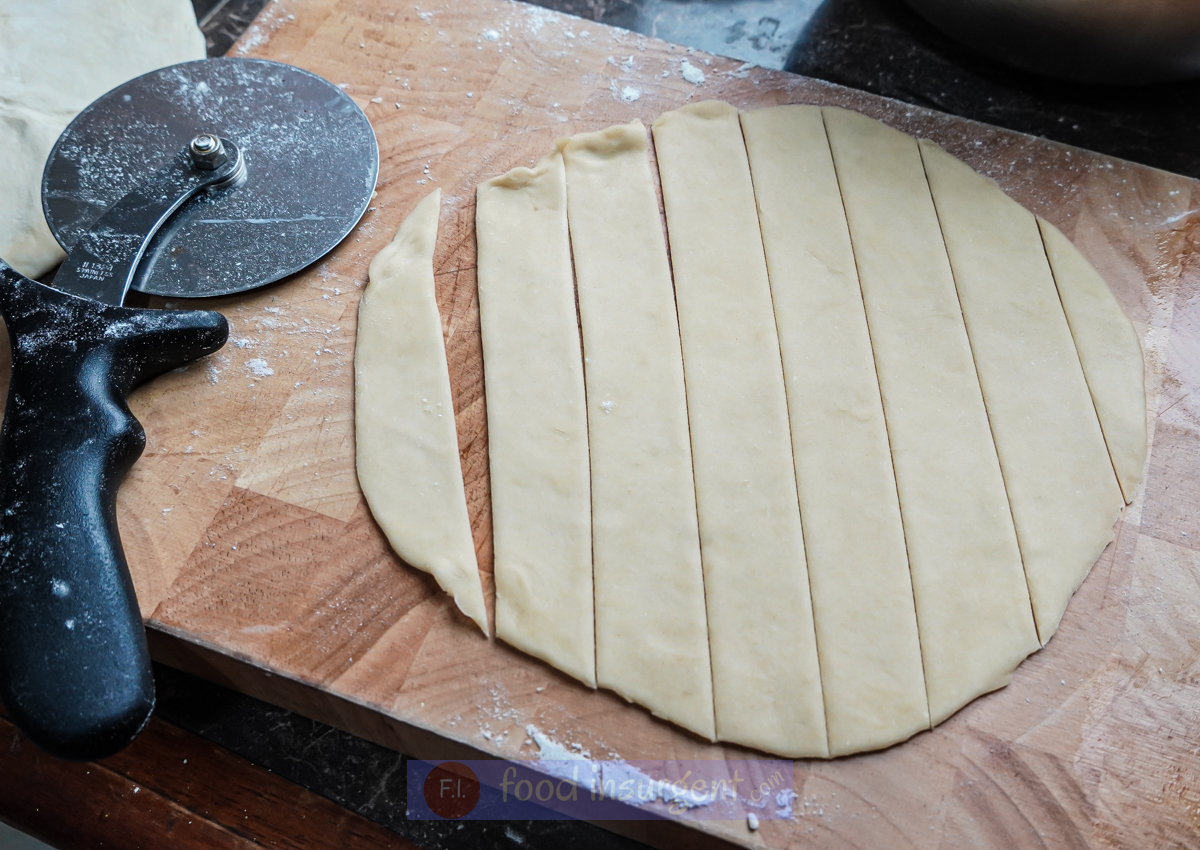 This recipe for the best chicken n’ dumplings will keep well in the fridge for 4-days. Just make sure you keep it in an airtight container. You can also freeze this recipe in an airtight container for up to 3-months. Place it in the fridge to thaw overnight the day before you want to eat it. Reheat this recipe either on the stove (over low heat) or in the microwave for 1-2 minutes. You might want to add a bit of chicken stock or water if it’s looking a little too thick.
Prep Time 15 minutes
Cook Time 1 hour 15 seconds
Total Time 1 hour 15 minutes 15 seconds 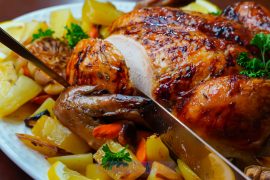