Share on Facebook Share on Twitter Pinterest Email
Succulent garlic stuffed chicken and vegetables, seasoned and oven-roasted to juicy perfection, it doesn’t get anything better than this. The moist and tender, chicken compliments and enhances the taste of the baked veggies, creating a most flavorful dish. What is Roast Chicken? Roasting chicken involves using dry air to cook the chicken on an open pan, sheet’ or skewer. Some similar methods to roasting include baking on a wire rack, using a rotisserie, or using a grill, all of these use dry heat for cooking.  Facts About Roast Chicken 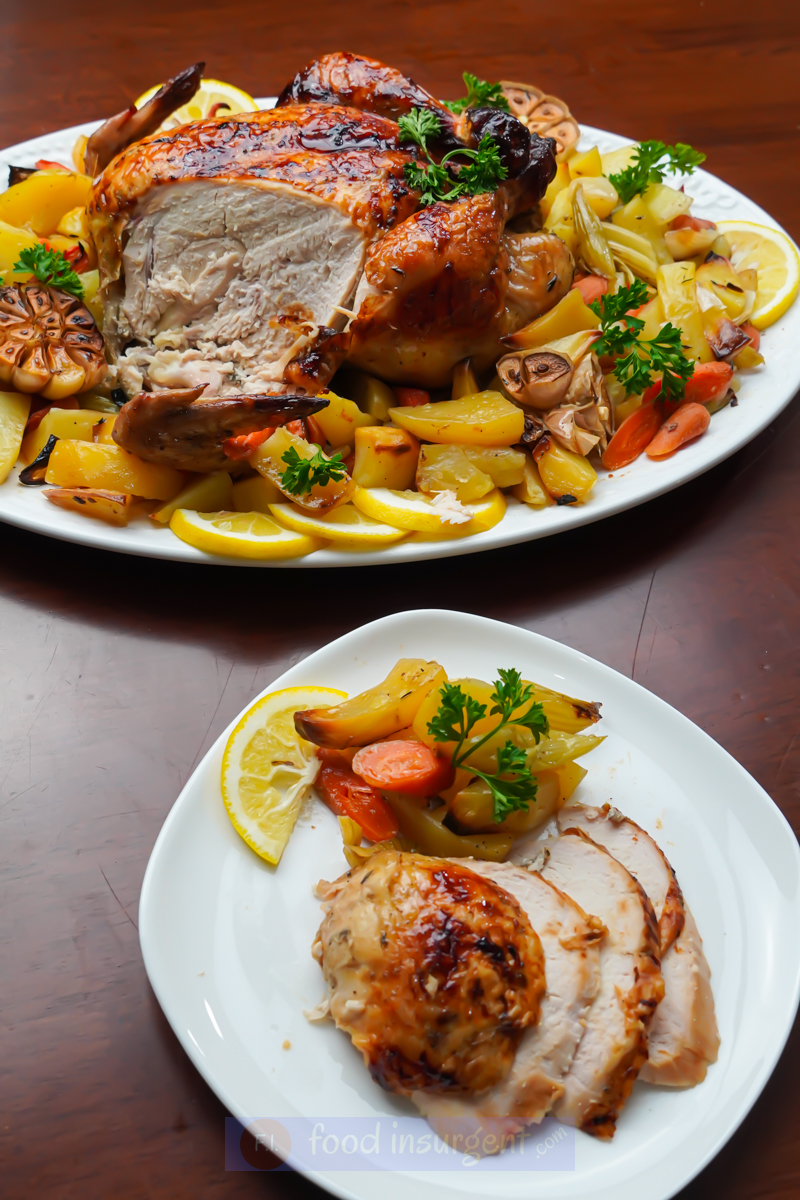 Origins Roast Chicken dates back to the middle ages in Europe, during this era people would roast chicken and other meats over an open fire and rotate it to cook evenly. Some say it originated in France, while others say it was Germany who did it first, either way, I’m not complaining. When This Should Be Eaten This roasted chicken can be enjoyed as part of the main dish to a meal, this can be eaten at lunch or dinner. Serve at dinner with family, friends, or guests. It is great for special occasions and holidays such as banquets and Christmas dinners. Best Served With This delicious Roast Chicken goes well with most dishes! Pair it with potato salad, rice salad, garlic bread, grilled corn, or roasted broccoli for a sumptuously mouth-watering meal. This recipe is good for 8 people, making it perfect for Sunday dinners. 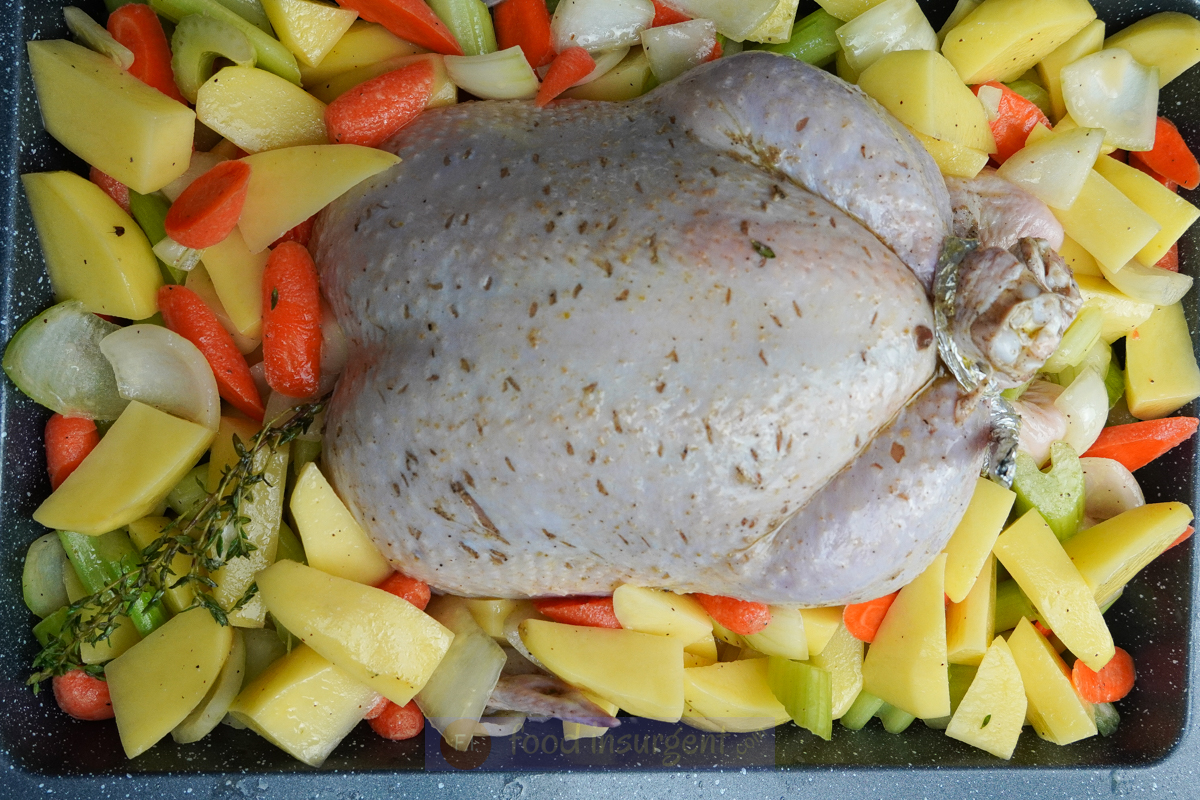 How The Ingredients Work Butter– We used the butter to brush the entire chicken before seasoning and baking. What this does during baking is, it gives the chicken a nice golden color, helps to crisp the skin, and adds extra flavor. Salt and pepper – We use a combination of the to season both inside and outside of the chicken, and the veggies. This enhances the flavor of the dish and helps to tenderize the bird.  This Is How It’s Done! This is how we made this tasty dish. First, we seasoned the veggies with olive oil, salt, and pepper, then set them aside. We placed the chicken in a roasting pan, remove the giblets, and used paper towels to pat dry. We then seasoned the inside of the chicken, brushed the outside with melted butter, and applied more season on the outside as well. We tied the legs, tucked under the wings, and spread the seasoned veggies around the chicken before roasting. 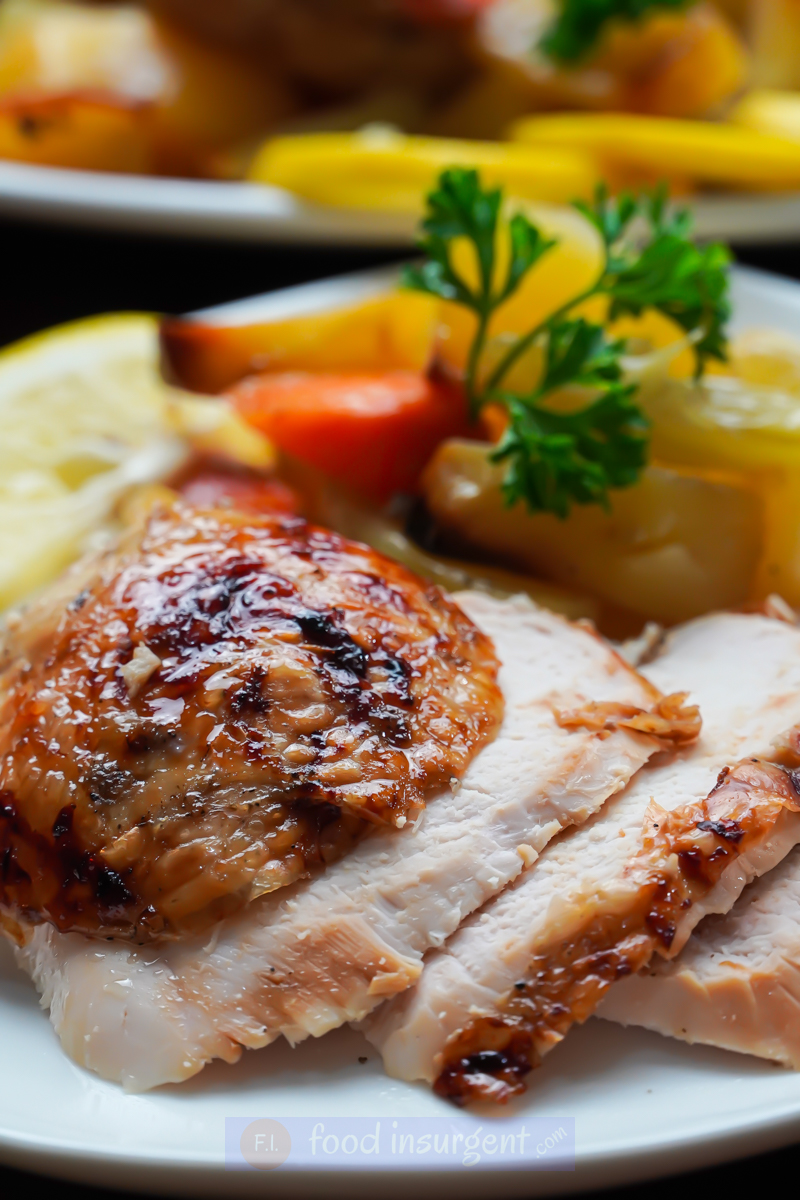 Why Should You Make This? This one-pan chicken dinner is an incredibly delicious, and hearty meal, and it won’t break the bank. This recipe makes enough for 8 people which is great for a family dinner with a few guests. It takes just under 2 hours to make but I assure you it’s worth the wait. Terms Used In The Recipe Giblets– giblets consists of the heart, liver, gizzard, neck, and other internal organs in the chicken. These must be removed before seasoning and roasting. Rest– After baking the chicken, we placed it on a platter and covered it with tin foil, and rest for 15 minutes. This allows the meat to reabsorb juices and retain its moisture. Questions And Answers Q: What other potatoes can I use instead of Yukon gold? A: This recipe calls for 6 Yukon gold potatoes but red potatoes can be used as a replacement Q: I don’t have a roasting pan, what can I use as an alternative? A: Use a cake pan of the same size and a rack as a substitute. Q: What is 425°F in celcius? A: 425°F coverts to 220°C. This Roast Chicken recipe is beyond delicious! It’s tender and juicy, on the inside but crisp on the outside and the roasted veggies add that extra flavor. Believe it or not, this recipe is budget-friendly, costing very little to make and it’s good for 8 people!
Prep Time 15 minutes
Cook Time 1 hour 20 minutes
Additional Time 15 minutes
Total Time 1 hour 50 minutes